This marks the second, complementary set of requirements in the Lujan Grisham administration’s groundbreaking approach to reduce air and methane pollution from the oil and gas industry. Combined with the ban on routine venting and flaring finalized by the state Oil Conservation Commission in March 2021, these rules hold oil and gas operators accountable for their pollution, limit waste, protect public health and combat climate change.

Methane is one of the key drivers of climate change. It is a powerful greenhouse gas 84 times more potent than carbon dioxide in the short term. The New Mexico Environment Department will implement the oil and gas air pollution rules fthe EIB finalized today. The rules require oil and gas operators to inspect all wells for leaks on a frequent basis without exemptions and protect those living closest to development by requiring more frequent inspections to find and fix leaks in proximity to homes and schools.

Check out our ad published in the Santa Fe New Mexican thanking Governor Michelle Lujan Grisham for her leadership. 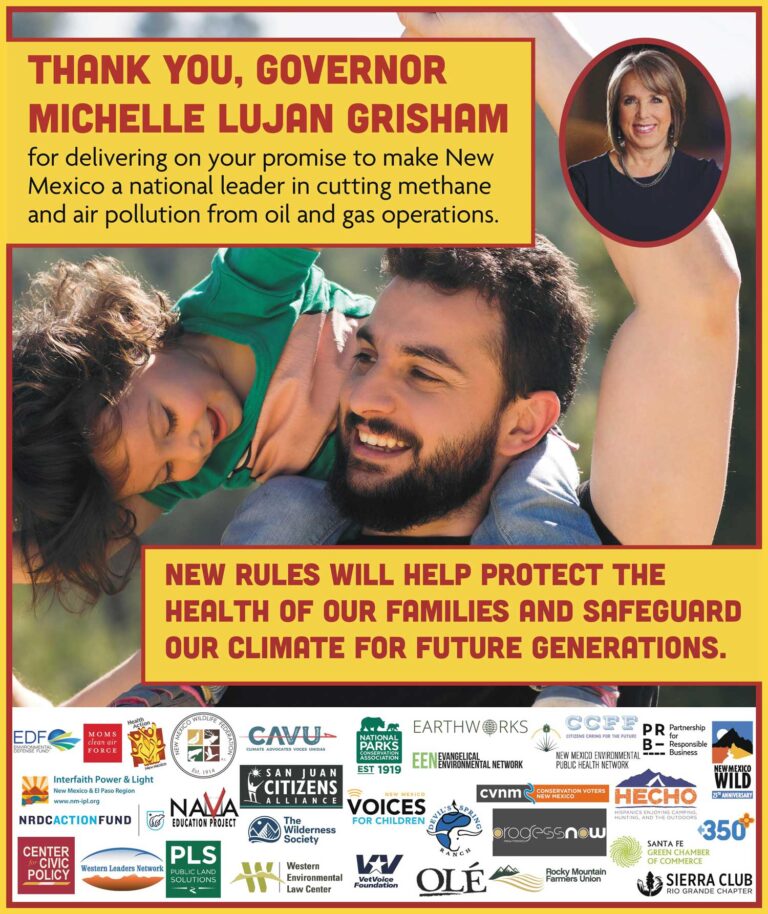 “Thanks to the leadership of Gov. Lujan Grisham, the state has taken an important step toward protecting New Mexicans from the acute and long-term impacts of oil and gas pollution and building a better, healthier future for our communities. Now we need the federal government to follow the state’s lead, banning routine venting and flaring and frequent leak detection and repair on all facilities and wells”

“Air pollution from oil and gas operations in New Mexico endangers the health of frontline communities and adds to the climate burden. We applaud Gov. Lujan Grisham’s leadership pushing for nation-leading rules to protect public health, tackle greenhouse gas emissions, and ensure that the oil and gas industry takes responsibility for its chronic air pollution emissions. New Mexico can be proud that today the Environmental Improvement Board adopted strong rules that include our coalition’s proposal that protects frontline communities that bear the brunt of oil and gas operations.”

“Protecting New Mexicans’ air from largely unchecked methane pollution will open new doors to a more stable climate and healthier future for our state. Thanks to the Lujan Grisham Administration for stepping up to effectively hold the oil and gas industry accountable to reduce its air and methane pollution.”

“The New Mexico Environment Department and the EIB deserve credit for strengthening air pollution rules that will protect the health of frontline communities, which are also impacted by the fossil-fuel induced climate crisis. Those communities themselves have been extremely important for ensuring that the ozone rules, combined with the methane rules approved by the Energy, Minerals and Natural Resources Department and the Oil Conservation Commission a year ago, have positioned New Mexico as a leader on the way to a clean energy future.”

“Cutting methane pollution is one of the best levers we have to reduce air pollution and fight climate change. With nearly 9,000 children under the age of 5 and over 78% of young kids living within a mile of an active oil or gas well in San Juan County alone, adopting strong rules that protect frontline communities is a breath of fresh air to parents around New Mexico. We are proud to see Governor Lujan Grisham and the Environment Improvement Board taking this opportunity to lead on ozone rules that help protect our children, our communities, and combat climate change.”

“The standards finalized today represent historic progress for the health and safety of communities across New Mexico. Gov. Lujan Grisham’s administration is showing the ambition needed to stop unchecked oil and gas pollution, increase energy security, protect public health and tackle the climate crisis. NMED’s rules, which address outsized emissions from smaller, leak-prone wells and protect those living closest to development with more frequent inspections to find and fix leaks, offer a powerful example for the EPA to build on as it advances nationwide methane protections.”